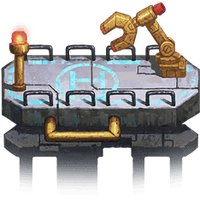 The Tarmac is a location within Eden that you can use to recruit the 3 Eden Airships.

The Tarmac proper can be used once you have finished the Tarmac (Maze) and then finished all the Tarmac Repairs to the Broken Tarmac.

The Tarmac has basically one function: to recruit Eden airships:

The airships can be recruited in any order and each costs almost the same to recruit:

The Research button is just a link to the actions unlocked by repairing the Tech Hall.

Retrieved from "https://gdmaze.fandom.com/wiki/Tarmac?oldid=51100"
Community content is available under CC-BY-SA unless otherwise noted.