Also called Ancient Mine Pit and Ancient Relics, the Relics Excavation Center is unlocked when you complete the Ancient Cultural Relics Sky Maze. The center will allow you to collect relics that accumulates in your Tram Car even when you are offline and will also allow you to plunder other players or take revenge on players who plundered you.

When you enter, you'll see the following:

The Expand menu allows you to make certain enhancements that affect your Exploration, Plunder and Revenge functions as well as the Ancient Mining Pit itself. There are four tabs:

From here you can increase your relic digging rate, relic digging capacity, gold addition (mines coins along with fragments), plunder certificates (enhances how many fragments you can steal from a successful Plunder), number of plunder targets, shield protection, max radar targets, and max battery power.

On this tab you can buy Airship chips for the Devil, Musashi and Orbit Satellite when certain conditions are met.

You can also craft the following Sky Combat Combo Skills:

From here you can unlock and upgrade your Sky Medals as you find them.

This tab only appears when you get your first Wing Plane. Here you can review your currently unlocked Wing Planes. Each Wing Plane has a 5% chance to show up for a battle. 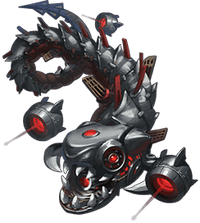 Plunder uses the Faction and Airship that you last used in Exploration mode to assault other players for the chance to get Relic Fragments and Coins from their Ancient Mining Pit and the occasional Mysterious Statue.

You begin with the ability to plunder 2 players and your targetable players change every 8 hours. When you click on a potential plunder target, you can see their stats (as per Enemy Airship above) and can add a Green Runestone to boost your combat effectiveness while raiding them.

In the Expand menu of the Ancient Mining Pit, you have two Plunder-related upgrades: Scouting (the Camera) and Shield Enhancement (the Generator) both of which cost Gems to upgrade.

The Scouting Upgrade can increase your number of available plunder targets up to 6 per 8 hour window.

The Shield Enhancement Upgrade puts a shield up over your mine after you have been Plundered by another player. The shield can be upgraded to last up to 8 hours, but if you Plunder another player, your shield falls.

Successful Plunders are the prerequisite to purchase Devil Airship Chips from the Expand menu.

The Musashi Airship Airship Chips are unlocked based on the number of times your mine has been plundered, whether you take revenge or not.

Every Sunday, there will also be Darla Montes (Boss) available to attack.

As the saying goes, what goes around comes around. If an opponent successfully Plunders your mine, in addition to getting a protective shield to protect your remaining mined fragments, you have a chance to return the favor.

Clicking on the crying Gumball will reveal the player that attacked you. You can choose to take revenge any time within 72 hours of being attacked. Opening the revenge screen will allow you to add a Red Runestone to boost your bloodlust as you attack your foe.

Retrieved from "https://gdmaze.fandom.com/wiki/Relics_Excavation?oldid=59605"
Community content is available under CC-BY-SA unless otherwise noted.