This event is one of the four Airship Gumball Events, and combines airship battles and mazes. 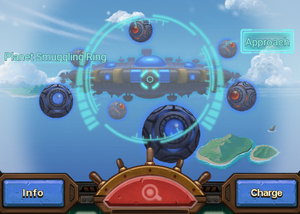 To have access to this event, you need to have unlocked airships and at least 100k energy. If you meet the requirements and the event is ongoing, your first sky exploration should make you approach the event. After that, you can return to it by clicking on the saucer that will appear on your mini-map. 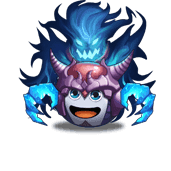 Defeat the enemy ships for score rewards and badges. Score is used for end of event prizes (Mutant fragments and The Smuggler airship chips). Badges are for purchasing prizes in the badge shop.

When you defeat a mutant in the sky, you will either get an extra reward (on top of what is listed above) of 10 badges or be offered the opportunity to follow the defeated mutant into a maze for 1 vigor. See below for details.

If you fail a fight multiple times, you'll get a runestone that will automatically be used in your next sky fight for this event. The number of fails needed to get a rune vary but it is usually in the range 3 to 5.

Sometimes after defeating a mutant, you can follow it into a maze (1 vigor). You have only one attempt per day to complete the maze. If you fail to complete the maze, it will disappear. You will not have access to re-enter the maze until you defeat that mutant again. The maze shows up randomly each day.

If you defeat all the opponents, the option will on average be offered 1.5 times per day. It is never offered from Cosmic Godfather nor for the big final fight of the final day.

Note that there is also likely some randomness to the rewards.

) for prizes. Costs may change between event instances and new items may become available for badge purchase.

Retrieved from "https://gdmaze.fandom.com/wiki/Planet_Smuggling_Group?oldid=62554"
Community content is available under CC-BY-SA unless otherwise noted.