Complete this maze to get the Bounty Hunter gumball

To get the Kraken Captain gumball

After obtaining the Kraken Captain gumball, you do not need to feed it on the following run. All you need to do is to summon it and let it die, it will drop 10

each run. There is no known way to earn 20 Kraken Captain 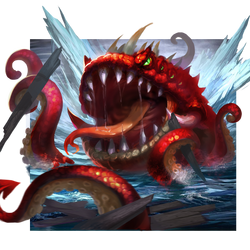 Once summoned, Davy Jones alias Kraken Captain becomes an ally. He remains at your side until he dies or on the first time, you recruit him.

He can be equipped with 3 items (all from The Undead's Treasure), and fed some food. The 3 items that he can equip are:

Besides Roasted Squid, you can give him other foods to increase his viability. It's probably not worth it but it can be done. Foods will normally give him as much Attack and HP as it would give to Gumball.

Some special foods have special effects:

Note that increases to his Defense will also increase your own defense for as long as the ally is alive.

Upon clearing a floor above 40F, there is a random chance that there might be a Pirate Attack. 4-6 Pirate Ships will spawn and attack you. They take reduced damage from all forms of attack, except for the Shoot command using the Cannons. The Pirate Ships will leave after 10 turns if you do not defeat them. Defeating the Pirate Ships using the Cannon rewards you with some gems (limited), a Dragon Ball, EP, scrolls or some food. If the Pirate ships are defeated in any other way (e.g. exiling or killing with spells or attacks), they will not drop any rewards.

Out of Maze Loot[]