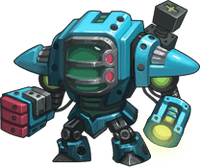 Metal Storm is a mecha suit that replaces the Eden Maze firearm mechanic in the Hall of Overseeing maze and is a major feature of Eden's Land. It features three unique upgrade trees that function similarly to Titles, requiring Smart Chips to upgrade. It also features a beam cannon as an active skill, which changes functionality depending on the upgrade path selected in the Cannon Tree.

The following items that are related to the Metal Storm:

The Metal Storm comes with an Active Skill, the Energy Cannon, which can be upgraded into either the Beam Cannon or the Gravity Wave. Each cast of the Active Skill consumes 1 Energy. The Metal Storm has a capacity of 3 Energy, and Energy recovers after ascending 4/3/2 floors, based on the level of Energy Storage Program.

What impacts and doesn't impact the cannon's damage :

This enhancement tree lets you recover cannon energy, transform the Energy Cannon into either a Beam Cannon or Gravity Wave and enhance its effects.

This tree helps you do more spell damage, recover MP and increase effects of all spells.

Retrieved from "https://gdmaze.fandom.com/wiki/Metal_Storm?oldid=59782"
Community content is available under CC-BY-SA unless otherwise noted.